The Future Starts Today Not Tomorrow.

Since I’m #notoriouslysingle … I’ve got no little ones to watch unwrap gifts, nor do I have a partner at the moment to surprise me with breakfast in bed. What I do have is a piece of panettone I had my brother smuggle for me from my parents house on Christmas Eve, some amazing coffee with cream and Netflix! 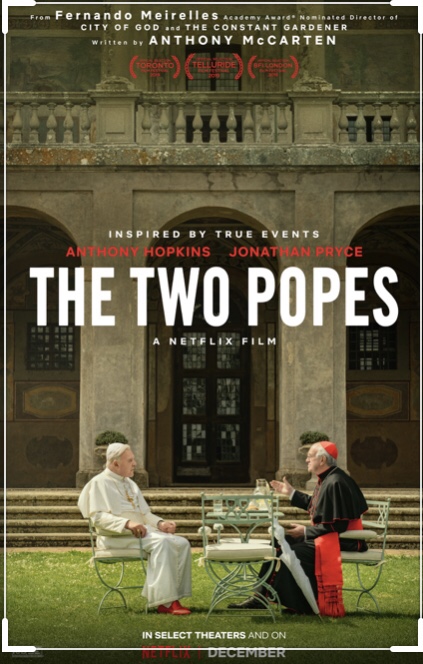 “Have you watched the 2 Popes-on Netflix?” An atheist recently asked me.

Honestly, I flipped through it on my Netflix que but really wasn’t interested.

The atheist strongly encouraged me to watch it. He even sent me a text with a link to “Vanity Fair”magazine chronicling a review to the movie.

I was raised catholic,went to catholic school, and even visited the Vatican a few times. Though, I no longer practice Catholicism , I really enjoyed this flick!

As a writer the hero’s journey really stood out in this one!

We see the early story of Jorge Bergolio aka Pope Francis as he contemplates becoming a priest. He works in a lab, is in his early 20’s,and is about to propose marriage to his girlfriend.

Though he’s conflicted because he was wanting to enter the priesthood but had not received “the call” from God.

Although the storyline may not be all that true to events one can admire the storytelling.

A few years ago, I wrote a blog Is Frank Capra’s “It’s A Wonderful Life,” Really That Wonderful? I recently reposted the blog which brought about some disturbing controversy. To summarize In “Its A Wonderful Life,” the protagonist “George Bailey” doesn’t listen to his intuition to travel and see the world but instead follows what society tells him to do. He marries a wife whom he really didn’t want to marry, takes a job he hated, and stays behind in the town he grew up in to save the day.

It’s ironic that both protagonists in both movies are named the same “George, Jorge” but take on very different paths.

Yes, “Jorge” in the 2 Popes goes on to follow his intuition and the “signs from God” he receives to travel the world, live his greatest adventures and become Pope. He doesn’t stay behind and listen to the naysayers like George Bailey did …

I remember while I was going through a divorce many years ago, I was working at a Catholic Hospital with several Nuns from different orders. I was going through a deep depression and asked God for a sign on what my life path was supposed to be. One day while I was making coffee in the break room a plump Nun in her mid 60s with a strong Irish accent pleasantly sat with me as we shared a cup of Joe.

We had chatted together many times, But today she looked deep into my eyes and said ” Love , have you ever thought about joining Jesus’s order and serving God?”

I think I had tears in my eyes. My prayers were being answered. This was the true reason why I was getting a divorce: I was meant to be a NUN! I was meant to serve God. I was meant for a higher purpose!

” Yes, I was actually thinking about it. I’ve been so depressed due to my divorce!” I said through tears !

” Oh darling. I’m sorry you’ve been married. You’re not pure. You can’t be a Nun!” She says quickly finishing her coffee and getting up from the table announcing ” A patient needs my prayers. Gods work is never done. Have a good top of the morning!” She then scurried off faster than a cockroach exposed to a kitchen light being flicked on!

I was left sitting at the break room table alone. I was 26 years old and had been rejected by my husband saying he no longer loved me and now I was being rejected by God because I was no longer pure?

If you ask any of my friends today if I’d make a good Nun …I’d think they would all just start laughing!

And I’m glad how things have turned out since I was 26 years old. I’ve met many amazing people, traveled to awesome places, and created from my intuition!

The moral of both stories is … follow your gut and not what society tells you to do! Merry Christmas!