I have to say Big Ang was my “fav “reality tough gal! She was never afraid to be Big Ang. I loved her larger than life personality. Her nicotine steroid infested deep throaty voice. Her clothes. Her hair. Her makeup and of course her no nonsense attitude.

I loved watching her in action. She told it like it was!

I related to her. I’ve been told I call people on their ‘shit.’ And everyone should. We’d all be much happier, especially us women.

Big Ang was the peacekeeper on Mob Wives. Always trying to get the Mob Wives to stop fighting and sticking butter knives down each other’s throats. She kept it real and was an ally to all the wives.

Catfights seem to be all the rage on reality TV. If it’s not turf mafia wars on Mob Wives, then it’s The Beverly Hills Housewives accusing each other of ‘Munchausen syndrome.”

And let’s not forget the throw downs on Basketball wives: Los Angeles, New York, and where ever else!

Whatever manifests on television, seems to manifest in the world.

I often wonder if there has been more girls on girl catfights since the female “wives” shows hit the television circuit? Has anyone done a study?

Men don’t have these problems. Or so I’m told.

The backstabbing, cat clawing and jabs are REAL. Has reality TV started that stigma? Has a magnifying glass been placed on all women? 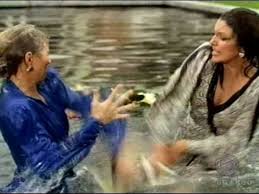 Everyone just assumes women can’t get along. Even if they are BFF’s.

I’ve been there, time and time again. Though, I’ve never personally been in a hair-pulling throw down (I’ve seen a few, not pretty!). I’m usually on the receiving end of the verbal “jab.”

This comes from an insecure individual disconnected from self. That’s my conclusion. 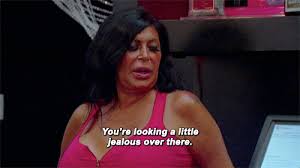 But, I started to explore why I get jealous, if I get jealous of a female. And I go through the rhythm of questions.

“Why do I have those feelings?”

“Do I want the house in San Bernardino? The 2.5 children? The ford focus? The passes to Disneyland? The bald fat husband that buys flowers only on special occasions?”

The answer to all the above is “NO!”

I then reassess my life: I’m single, free, can hop on a plane to France at any time, and do what ever the hell I want….. ! I’ve made my life this way on purpose. It was created consciously. I’m careful. I watch who comes in my presence. I only have one life to live. And I’m living it to the fullest.

Then I smile. I send my friend or nemesis I was jelly of, much “love.” They need it!

And the “jelly” feelings disappear.

Moral of the story: Women need to take Big Ang’s’s tips. Stop the catfights. Stop the verbal jabs. And don’t kill each other with butter knives.

If you are not “happy” with your life, then change it! If you can’t then, at least do something nice for yourself…. Mani Pedi, massage, and a mimosa!

Remember, we create our lives. It just doesn’t “happen!”

No one would watch BRAVO if Lisa Vanderpump held hands with all the Housewives and skipped down Rodeo Drive in Christian Lou Boutains… Snooze!

The next time a “gal pal,” or female sends you a verbal “jab.” Claim your power and call them on their SHIT! And ask why they are behaving they way they are?

But at least you will break that cycle of the “Bitchy Diva!”

RIP Big Ang, you will be missed, by me at least!