I’ve been dating this guy for the past few months. We met online. When he first reached out to me and wrote me an email his opening line was “No GAMES!”

Unfortunately, it seems like from the moment we first talked, it’s been nothing but GAMES!

I’ve noticed certain strange patterns with him, for example: he only calls me on Wednesdays when he’s driving home from work. The phone conversations consist of him just talks about himself and rarely asks about me. He only sees me on Sundays at the same wine bar. My heart sinks to the pit of my stomach, and the feeling is terrible!

The relationship is getting boring! It’s interesting because this guy is in his forties? Do these “boys” ever grow up? 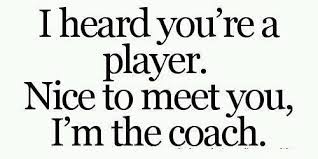 I throw down the red penalty card on this situation cuz you are dating a PLAYER!

Per Stevie Nicks: “Players only love you when they’re playing!”

He even subconsciously set the stage for the games to begin! If his opening line was: “NO GAMES!” subconsciously he means: “I’m ready to play my player game, my rules my time!”

These guys rarely change, and no they don’t grow up to be MEN, they stay BOYS!

Bravo to you for realizing your own patterns! You have woken up, and realized you fall for players! Perhaps you have to do some self exploration and figure out why you are falling for someone who makes barely anytime for you, and always time for himself?

Why are you falling for a narcissist? Are you not giving yourself the love and respect that you fully deserve? Don’t be his Echo, life is too short!

My suggestion:Be the coach of this game: give this player the red penalty card and kick him out of the game! Also love yourself, and the right man (not boy) will come along!