For years I’ve been hearing females rave about the “Diane Salad.” No, it’s not a salad made up of parts from a woman named Diane, but a famous salad that can be found at the Green Street Café in Pasadena California. On a particular Thursday evening, I happen to be in the vicinity, so I decided to finally see what all the fuss was about.

I remember a few years ago when I made an appointment with a new female physician for a physical examination. She was about my age, Asian, and wore boots with heels severely worn down that they made a clicking noise much like a tap dancer when she walked. She was chubby, short and seemed overly tired. Perhaps she had not had her morning coffee, and maybe I was being too judgmental, after all it was eight am.

She greeted me with a limp handshake and a dry smile as she quickly buries her nose into her computer and she started asking me why I was there. She seemed uninterested and perhaps bored as I recounted to her my issues: right sided sciatic pain, weight gain, and lack of energy. During the exam, I asked for a blood test to check my thyroid. I explained to her I was concerned that I was gaining weight and feeling very tired. She sighed deeply at my request and remarked, “All women have problems with weight gain,” and then proceeded to talk about herself.

“Look at me!” she said. “The only way I can loose weight is by eating one apple in the morning, skipping lunch, and having salad for dinner. Even if I eat that way, I still can’t lose weight!”

After an uncomfortable silence, she broke into a monologue of sorts: “My friends are all thin. Yes, they are Asian, but they are particular about what they eat. For example, we went to ‘Green Street Café’ for a girls luncheon and we all had the ‘Diane Salad.’ They were specific as to how their salads would be served: dressing on the side, no noodles, and no zucchini bread. I on the other hand have a love affair with food, and accepted my ‘Diane Salad’ as it is traditionally served, and yes ate all my zucchini bread!”

As she finished her monologue she took a long pause, and sent me on my way with lab orders to get my thyroid checked in tow. I bid her farewell as she turned around and clicked and clanked down the hall with her broken shoes. Basically, it seemed my whole exam was about this physician and her ‘Diane Salad’ experience and really not about my thyroid, my increasing waist- line or me.

A few days later I told the story to a friend, and she remarked,” Oh but the ‘Diane Salad’ is really that good!” She spoke about it as if she was in a daze smacking her lips to hold back the rush of saliva that the memory brought!

Finally, I found myself in Pasadena, one block away from Green Street, home of the famous ‘Diane Salad!’ I was hungry, and I decided to finally try it for myself.

I sat outside the restaurant, and had a friendly server and ordered the ‘Diane Salad.’ The server encouraged me to get a smaller portion and substitute kale for the shredded lettuce. However, I wanted the same experience as everyone else I spoke to! So, I ordered the regular portion with all ingredients intact, along with macaroni and cheese bites, a watermelon cilantro tequila infused margarita, and of course the zucchini bread! 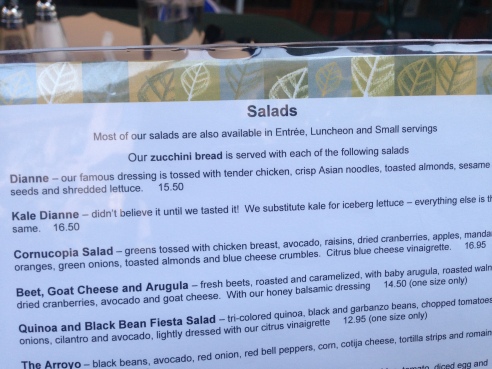 As my behemoth salad was brought out, I heard a woman sitting at the next table scoff “In France our salads are simple they don’t have fifteen ingredients in them like you Merikans!” And yes she was a tiny wafe of a woman!

Diligently, I ignored her comments and made my way through the mounds of lettuce, chopped almonds, crunchy noodles, chicken, all covered in the secret dressing. It was a crunchy feast in my mouth that was rather enjoyable. The margarita was divine and a bit on the tart side as a margarita should be. The macaroni and cheese bites were just ok.

Now, the zucchini bread was the thing that made my meal! Words cannot express how amazing it tastes, and because its main ingredient is zucchini, you can eat it for dinner, which in my brain makes it ok. My waiter described the bread as being “Like cake!” And yes, eating cake for dinner is a splendid pleasure! 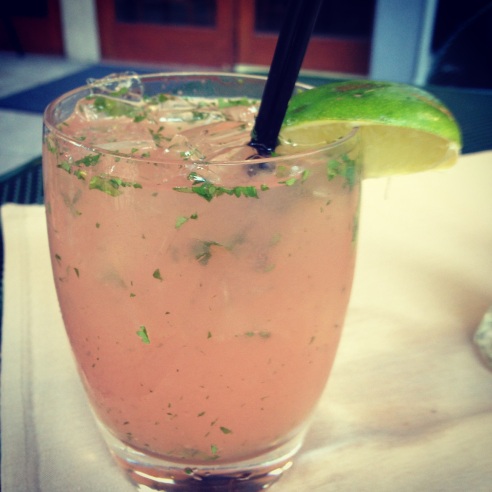 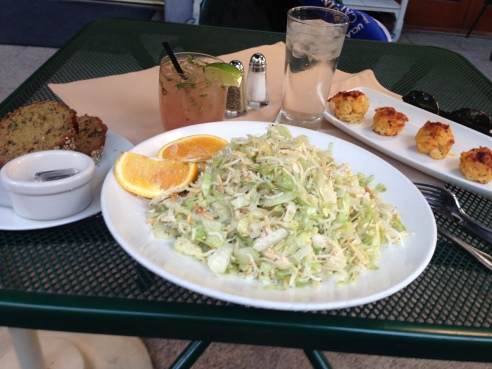 My complete dinner with zucchini bread

Overall, the Diane salad was good! I don’t think it’s one of the best salads I’ve ever tasted, and I do agree with the noisy French woman sitting next to me, simple salads in France are indeed amazing! Much like my former physician, I do enjoy food! Anyone that knows me can see this is true. And if you check my blood work, my thyroid seems to be working fine. Life is too short to be putting dressing on the side, and eliminating crunchy noodles! Enjoy it while you can all mixed in as one!

2 Responses to “The Diane Salad, What’s All The Fuss About?”