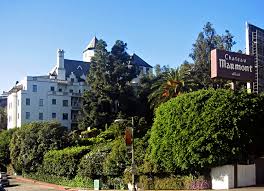 On a creative Thursday night my friend Aydin and I decided to have a photo shoot. Anyone can be a star in this city and anyone can have a photo shoot. You just have to know the right people. Earlier in the day I had gotten my hair and make up done, in order to complete myself for the shoot. After all it does take a village and several pictures to get the look just about right.

After the shoot and a glass of wine to celebrate, I noticed that some friends had checked themselves into the Chateau Marmont on Face Book. I asked them if Alana Del Rey was there and they sent me back a picture of her on their iPhone in between the two of them.

That’s when the spontaneous Pisces side of me kicked in and challenged Aydin a fellow Piscean to an adventure just over the hill. He lives in the valley and Google maps told us that the Chateau Marmont was only a twenty- three-minute drive. We wasted no time hoping into the car and driving over the hill excited to surprise our friends.

On the way there we were both giddy with excitement and looking forward to or adventure. Neither of us had ever been to the Chateau but always longed to be there. We talked about its history, rich with gossip and suicide of celebrities gone wrong.

When we pulled up on to Sunset Blvd and into the valet parking, we were asked if we had reservations, and of course our answer was “No!” After all we were just surprising our friends who had checked in on face book approximately 36 minutes ago.

We gave up the car to the valet and as he reminded us that the fee was twelve dollars cash only! We quickly jumped out excited to surprise our friends, and ran up to the hotel where we were met by several people who included: A large black man who was curt but charming, and an angry elderly ginger haired woman wearing a hideous green dress. The ginger woman approached us and asked, “Do you have a reservation?”

I responded: “No, I’m surprising my friends we think they are inside, can we go look!”

She then held out her arm like a railway crossing, all she needed were some lights to make the action complete. She asked for our friend’s names and she looked them up and sarcastically said “NO, THEY ARE NOT HERE!” in a lude British accent. And thus both Aydin and I were turned away. We thought the angry ginger woman in the green dress foiled our surprise. Aydin said it was typical Hollywood pretentiousness, but I corrected and reminded him the woman was British! I am true native Angelino and like to defend my turf and feel that the angry Angelinos are the transplants that are here with lofty dreams that never come to fruition!

Perhaps Lindsay Lohan messed it up for us with her raucous behavior, or was it Jim Bellushi’s suicide in Bungalow 3, Led Zeppelin riding their motorcycles through the lobby, Jim Morrison climbing the hotel’s rooftops, or was it Helmut Newton crashing his Cadillac into the lobby wall and dying. Did they all destroy our chances of getting into the Chateau Marmont with out a reservation? Or was it all the studios of the 1930’s that would put up their actors so that they could sleep with underage girls, do drugs, and destroy the place? Up until recently the Chateau was known to locals as the place where has been movie stars went to die. Now not even a dead movie star can get in with out a reservation!

Still true to our adventure we decided to try the “Bar Marmont” which was next door. At least the people at the door were much nicer, and a bit more chic. A tall skinny blonde girl wearing a white fuzzy coat greeted both Aydin and me. The coat confused me a bit since it’s May and 75 degrees outside, but oh well perhaps she has thermal body regulation issues? Anyway, they thought Aydin was paparazzi because like a good photographer he always travels with his camera. And no he is not Asian but Turkish so therefore could not pass for a tourist.

Eventually, we make it through the door with Aydin agreeing not to take pictures.

As we enter through the front doors there are several eccentric characters drinking various libations. I immediately felt like I had entered into a Stanley Kubrick film and was waiting for something surreal to happen like blood dripping down the walls, or a kid walking up to me and holding up a finger and saying “RedRum!” A tall bald woman with beautiful makeup caught my attention, and I couldn’t help but stare at her. Several men in suits surrounded her, and immediately I thought that she had cancer because she was bald and a little emaciated looking. I privately felt sorry for her but still felt that despite her illness she was beautiful.

After Aydin and I were seated I asked him what he felt about the woman after she walked by us. He told me she was a man! And when he/she walked by us again, I could see it. The bar was very dark with a red hue, in my defense it was hard to see.

We ordered a few beers, and some greasy calamari and way too spicy chicken. The bar food leaves not much to be desired. But the scene was eccentric with a choice of several rooms to settle into to.

Feeling a bit defeated for not having found our friends after reading a text that said: “We were never at Chateau Marmont, it was a joke!” both Aydin and I just had to laugh at our Hollywood adventure.

I learned a few things from the evening: Never believe Face Book posts from friends, never believe that just because a person is tall and bald that they may have cancer or are a woman, and always make reservations at The Chateau Marmont!