The hills of Hollywood have always held a certain kind of mystique loaded with history unknown to the natives of Los Angeles. On a particular Sunday, I decided to explore this urban secret with my friends Kim and Carney as guides through the eclectic landscape.

We all met at ‘The 101 Cafe’ on Franklin in the heart of Hollywood across for the iconic Hollywood Towers known to house some of the most elite Scientologists. No, I did not see Tom Cruise on this particular day, or Siri for that matter. But, nonetheless, I was the first person to show up, a rarity since I’m constantly tardy for the party. I thought I had miscalculated the time frame, and the tour had left without me, but before long people started appearing. 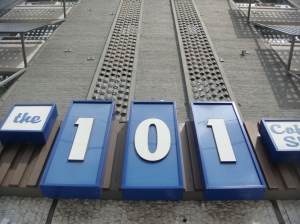 Kim and Carney arrived with great enthusiastic energy and told us briefly about the hike and what they had in store for us. I had no expectations and left my self and my senses wide open for any experience.

Our trek started upward into the urban landscape of the hills. First stop, Bungalows that once housed some of Hollywood’s up and coming 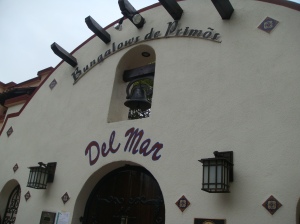 actor’s of the silent film era in which today is an artist community.

Carney gave a brief history lesson of what once was, as I pretended to be a paparazzi snapping photos through a wrought iron fence that

peaked into the colony.

Thankfully no one stole my camera, Rob Kardashian must not live there! 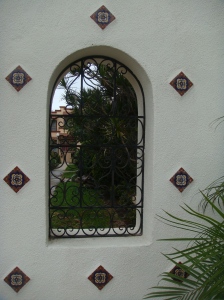 We walked through winding streets and came to some stairs, apparently the first of many.

Before we ascended, we stopped for some deep breathing, yoga asanas, and sun salutations led by Kim.

A great way to get centered, and balanced before the ascent, and the meeting with an Asian Goddess who

greeted us on our way to the top.

Along the way, we came across, beautiful homes in many different styles: Moorish, Spanish and Craftsman to name a few. 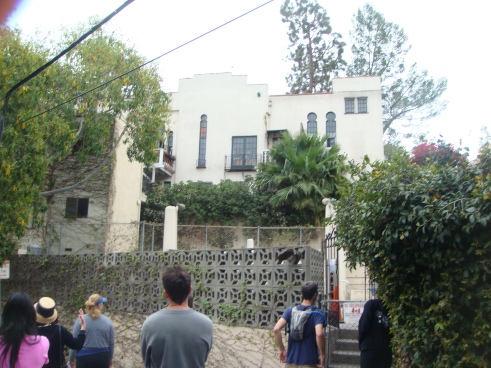 We saw castles where lions reigned as kings, and some guarded by dragons. For some reason, the lion was wearing a plastic veil, probably because he melts if he is touched by rain or is waiting for a marriage proposal. 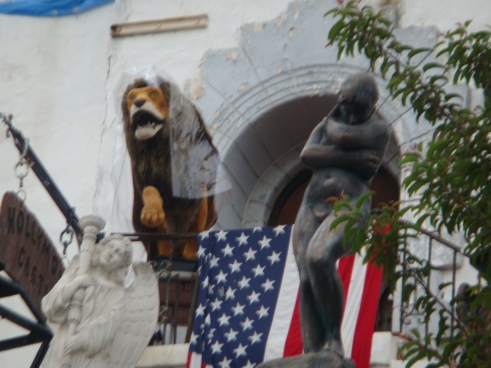 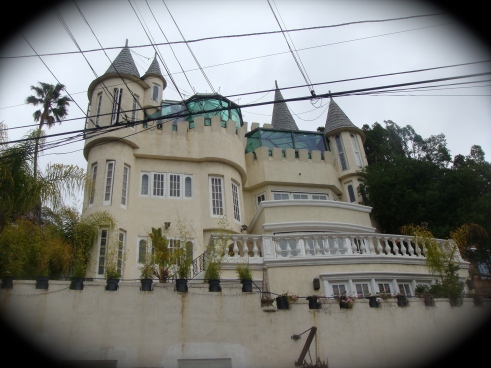 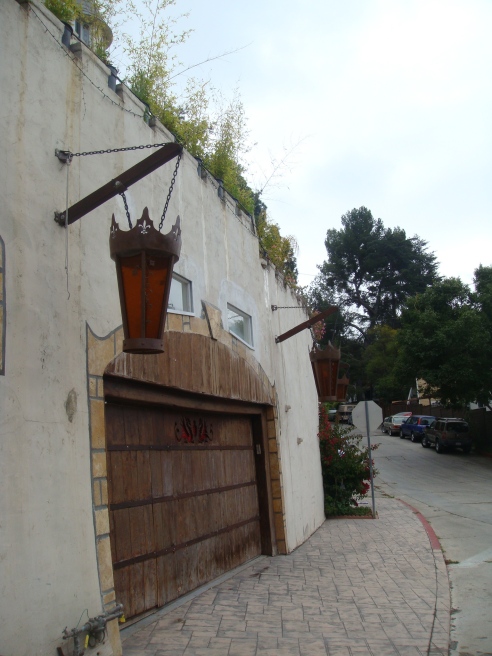 Carney educated us on “Krotona” an old psychic spiritual retreat way up in the hills that is now an apartment complex. Probably haunted by spirits who did not want to be disturbed by the many people who conjured them up! Once upon a time, it was also a place where women went when they were going through menopause! Probably to get away from their husbands who were the real problems!

More stairs ascending upward, then downward, then upward again where we stopped for  sun salutations, Warrior poses, and deep breathing. 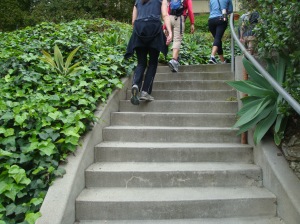 Continuing on our urban hike we came across the “Vendanta Temple” an esoteric spiritual retreat definitely a hidden gem. We walked through the spiritual grounds, taking a minute to meditate and say Ohm and thanks for spring and everything new! 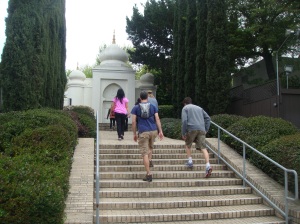 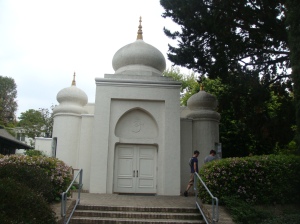 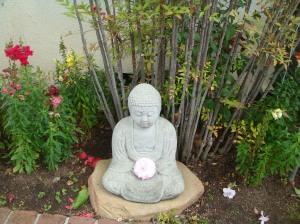 A few more steps down the road and we passed by great scenic vistas of downtown Los Angeles, Capitol Records, and possibly the ocean if it was not a cloudy day. 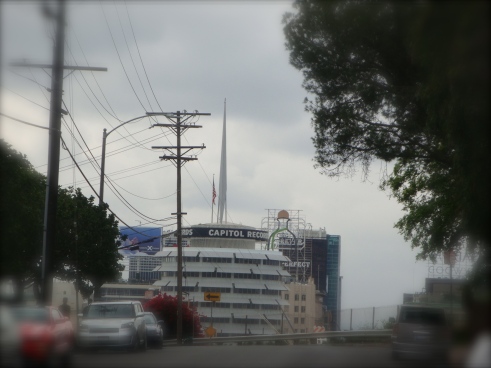 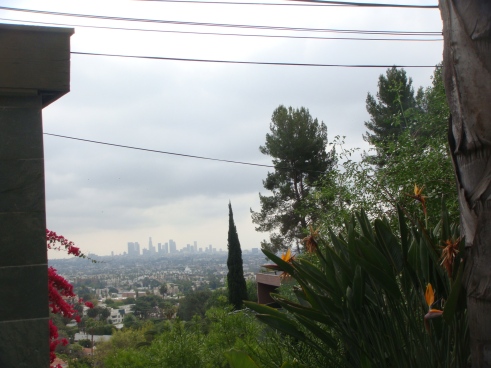 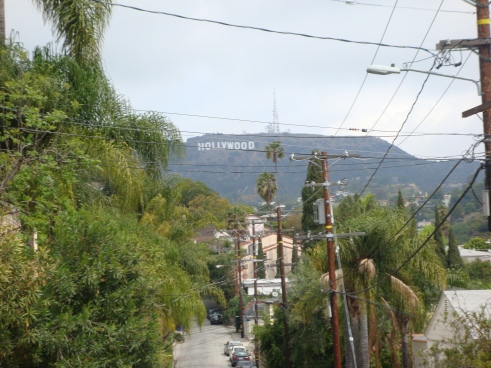 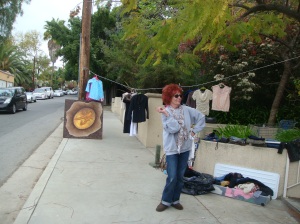 All my senses were being awakened: the smell of fresh rosemary and jasmine wafting through the air. Vibrant bougounvilla’s framed doorways, chirping birds singing their songs and a tree that I really don’t know the name of stood out with it’s leaves that kind of resembled fur! 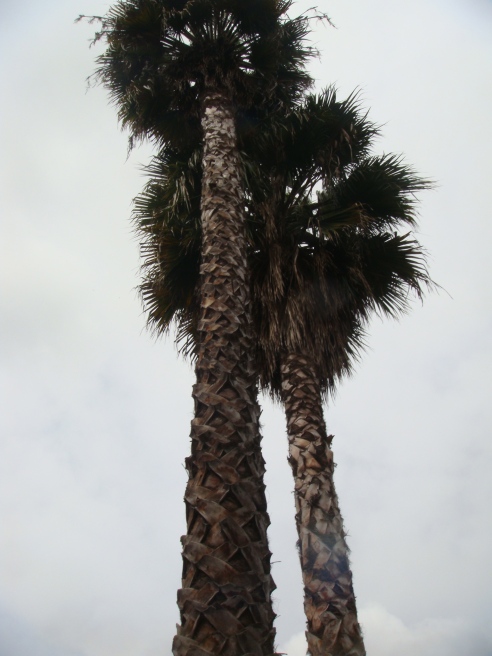 The Tree that had fuzzy fur 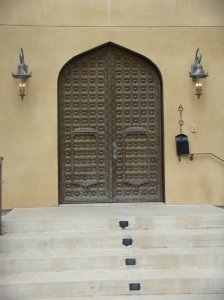 I was so caught up in the moment with letting my senses run wild with all the signs of spring the hills were offering, I ended up loosing the group! For a minute I felt like I was in that episode of the “Brady Bunch” where Bobby and Cindy get lost in the Grand Canyon, and the Brady family keeps yelling “Bobby, Cindy!” But no body was yelling “Ersilia” probably because they can’t say my name anyway! 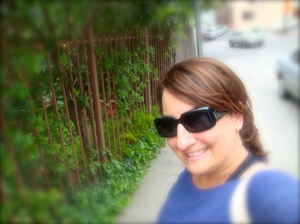 This is when I got lost!

But this wasn’t the Grand Canyon, what could really happen? I could get murdered, become an actress, or Tom Cruise would pop out of nowhere and get me to take one of those tests to see if I have been programmed by aliens! After pondering all these possibilities I decided to just run down the hill, and before long I found my group again.

Catching up with the group!

We ended the hike with some more yoga, saluting the sun one last time before we all headed back to café 101 for some Mimosas!

I felt like I walked into the 1970’s with the fake rocks on the wall, and pictures of strange geeky 70’s people used for décor. The service was a bit slow, and our orders were not entirely correct. Probably because it was Easter Sunday, or just Sunday for the many hippsters who occupied the space!

My Mimosa was top notch, but you really can’t mess up OJ and champagne. The French toast with bananas called my name, and I would give them a “3” rating on the scale of 1-5. But my friend Toni had the roast beef sandwich with mashed potatoes. I was so tempted to stick a fork in her food, but minded my manners to say the least. I would definitely try this place again on a weekday, and order the roast beef, which made my mouth water so much, I accidently salivated into the food of the girl that was next to me. She said she did not care because she was so hungry. It’s ok I have all my vaccines, and have not kissed any tainted men lately. At least I don’t think so!

Kim and Carney gave a beautiful urban tour through the mysterious Hollywood Hills. I hope they will continue their venture, and open their tour to the greater populace! It was a beautiful way to kick off spring, get some exercise, and learn a little bit about this mysterious urban treasure in our beautiful City of Angels! 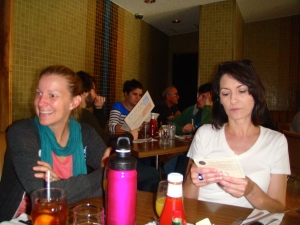 Check out Kim’s web page for yoga and hiking services in the Los Angeles area:http://kimberlyanngallagher.com

4 Responses to “A Tourist In My Own City: Hiking, Yoga, and History In The Hollywood Hills”