A girl dressed all in black with beautiful curly hair walks the streets of New York City armed with only a camera. What she experiences is only what every woman who walks down any street in any part of the world has experienced at one time or another: Harassment!

Several men in the video follow her, try to talk to her, call her “sweaty,” and even ask her out on a date!

After viewing the video memories of my first trip to Italy flooded my brain. I seeing my family for the first time, discovered nutella, and discovered sexual harassment!

“You can’t go out by yourself here, it’s not safe!” She would say when I tried to walk down the broken cobblestone sidewalk outside my aunt’s house in Triggiano, Bari, Italy.

But after only 2 days in the small southern Italian town, I totally understood why she was so overprotective.

It happened one night as I walked through the villa (main square) with my cousin Stella, and a three of her friends.

At first Stella commented on my outfit and stated my breast were too large and not to wear anything tight or revealing on the passegio (walk). The fourteen-year-old American girl in me thought she was just being jealous, after all we were only one year apart, and she was flat chested.

We walked arm in arm with each other, she told me that was the fashion, and it was also for safety purposes. Again my naiveté had the best of me, and I was clueless as to why we were doing this. But I just followed the trend.

Through the Villa we went like some sort of female Trojan horse trailing through a barrage of male harassment:

“Mi Piace quella con le scarpa rosse!” (Translated: I like the girl with the red shoes although none of us had red shoes on)

Many other derogatory sexually explicit phrases that I must have been too young to remember or understand followed!

It seemed we were all under some kind of an attack and the girls all urged each other to not look at them, smile, or acknowledge that anything out of the norm was happening. We just continued to walk around the villa as if we were some type of female warriors looking straight ahead continuing on with our purpose for the passegio.

At first I thought it was kind of cool, until a teenage boy grabbed my ass from behind and ran away! I was shocked and screamed!

I didn’t have a second to process what had happened until another teenage boy came from in front of me and grabbed my breasts! I then was speechless, until my cousin commented: “I told you your breasts were too big!”

Later, traumatized I told my mother what happened, and to my surprise she was not shocked, and just said: ”That’s just what happens! You have to be careful!”

At that time in Italy, sexual harassment seemed to be embedded as part of the culture! 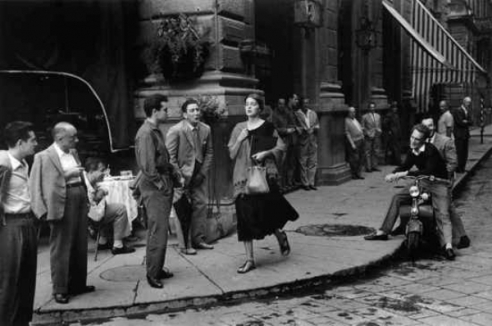 It’s no wonder that the video of a girl walking in New York City for ten hours has been so popular.

I was only made aware of it from a Facebook friend who had stated someone was comparing her to this woman! Which caused me to research it and find it on YouTube!

During my research I also viewed commentary form some male misogynistic pig who stated: “She is wearing tight jeans, what do you expect me to do!”

Technically the woman is dressed in black and no flesh is revealed. In other words she’s dressed modestly for walking down the street in NYC.

Unfortunately, since the age of fourteen I have been harassed just like every other woman on the face of the planet!

And it still continues even when I wear my bulky scrubs and walk down the streets of Los Angeles!

I’m not sure if this archaic cave man type behavior will ever end, but we must teach kids in school not to tolerate it!

Viral videos like this are a start and a great teaching tool!

2 Responses to “10 Hours Of Walking In New York As A Woman Video: #Notoriouslysinglegirl’s POV”