When it happened in Silver Lake and Echo Park, I didn’t think much of it. But now it seems that the “plague” has reached West Hollywood. Skinny jeans, 80’s style clothing purchased at the Good Will, dark rimmed glasses, bearded men and insecure personalities. “Hipster Nation” is officially taking over West Hollywood (WEHO).

My bestie invited me to dine at “Laurel Hardware” on Santa Monica Blvd. in the middle of WEHO. I had heard people speak of it, a few blurbs here and there. I was excited to finally venture in. They have open table and I placed a reservation for seven o’clock on a Friday evening. Parking in this neck of the woods can be challenging, but I was lucky and even found I had been gifted thirty minutes on a parking meter.

“Do you have a reservation?”

As I walked in to the establishment I was nervously greeted by an Anorexic wanna be model wearing fake fur.

“Yes, it’s under Lola!” I placed the RSVP under my alias I use at Starbucks to save my real name from debauchery.

“Have you been here before?” she interjected and gives me a once over secretly scoffing at my outfit.

“Um, no! Is there a secret password or something?” I say wondering why I was being interrogated? Had I suddenly walked into some trap like in a Quentin Tarrentino movie? Was an albino ninja going to come out and throw swords my way?

She then turned away and whispered to a short blonde girl wearing skinny jeans and an 80’s chic dark blouse. At least she smiled and led me through a journey to my table. On our way, we passed herds of “Hipsters.” The girl acted as a docent of sorts, and narrated our mini adventure.

The tour reminded me a bit of the jungle boat cruise at Disneyland. Except all the animals in this establishment looked the same! The men sported beards and dark rimmed glasses, the women skinny jeans and oversized 80’s blouses.

Finally, our tour was over and I was met by my “bestie” Dennis, who was also given a “Jungle Cruise” type tour by another blonde hipster girl.

“Everyone is a hipster in here! Everyone looks the same!” Dennis boasted before he even said hello.

He was confused just as I was. This was not your typical WEHO establishment! Where were all the good looking physically svelte men with crest white smiles? Where we all the Go Go boys sporting tight underpants swinging around on poles with dollar bills hanging from their unmentionables? Where was the beat of the house music that makes you want to dance all night long? And where were the guys saying, “Hey girl, you are looking fly tonight!”

Dennis’s observation was true indeed! It seems like Hipster nation is slowly taking over WEHO! It’s a change of scene for the neighborhood: instead of being greeted gregariously by an ultra fit gay man who would give me a lofty compliment, I was greeted by a hungry bitchy woman wearing fake fur. 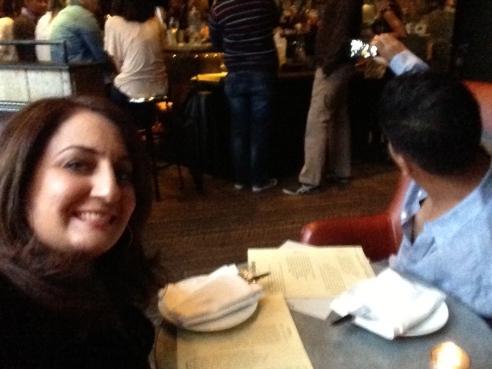 Blending in with hipster nation and taking simultaneous selfie’s

Both of us were perplexed with the hipsters that flooded the restaurant, and how they looked the same and seemed to have plastic personalities lacking individuality.

We managed to settle in and place our orders. The waitress asked if we had been there before? I just was wondering why everyone kept asking me that question? What does it matter? She suggested we “share” all our dishes. 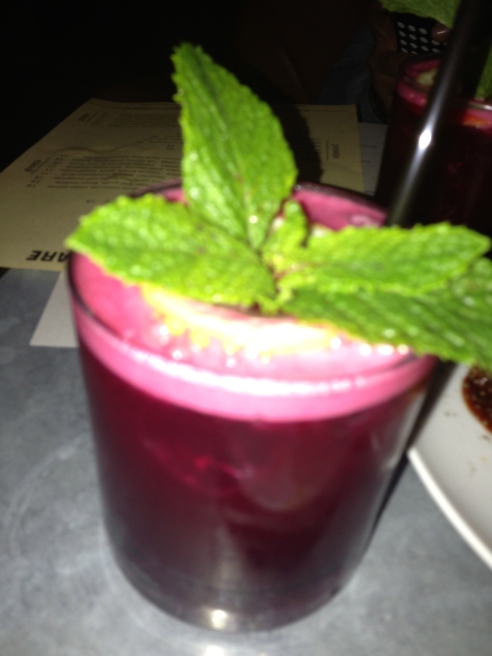 We started with the short ribs that were tasty but dripped with a bit too much sauce. Next we had the sun chokes and beet salad. Although mighty tasty, presentation was a bit slim. Our cocktail for the evening was the “Skinneas Fog” which consisted of red beat infused plum vodka, lillet rose, plum bitters and lemon. Absolutely yummy! For Entrees: we chose the lamb roast with roasted sun chokes pine nuts and market kale, and the Niman Ranch Burger. The lamb got two thumbs up from both of us, but the burger was ordered medium, it came to our table well done, and appeared a bit dry.

Our evening was enjoyable, but I fear the complete takeover of hipster nation in WEHO. Will the Gays really let that happen? I for one will rally against it! WEHO is WEHO for a reason and I love to be complimented and coddled by all my gay men, instead of given a once over by an insecure skinny jean clad gal. I’m just saying! I love hanging at all the gay bars where people are free to be themselves, laugh and let go of all their inhibitions! I’ve had some of my best nights out in WEHO and would hate to see Hipster Nation take over this neighborhood!

2 Responses to “The Plague of Hipster Nation……”